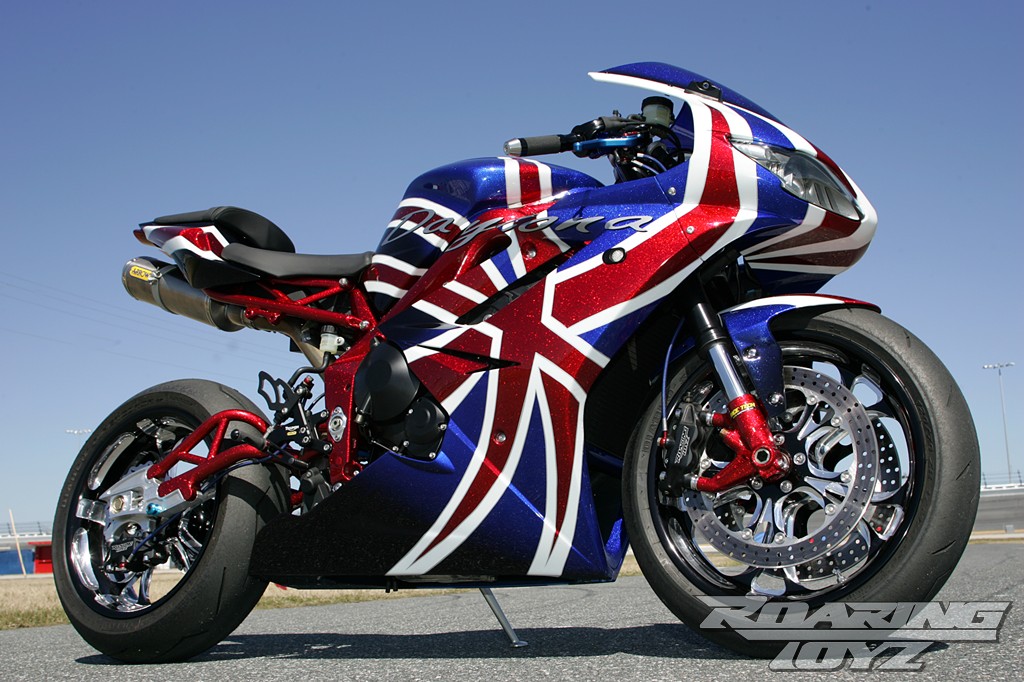 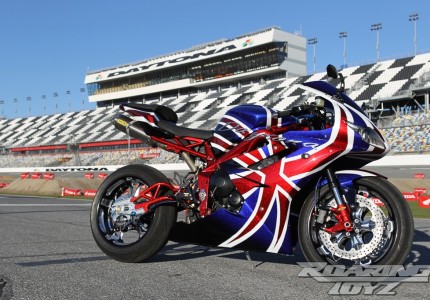 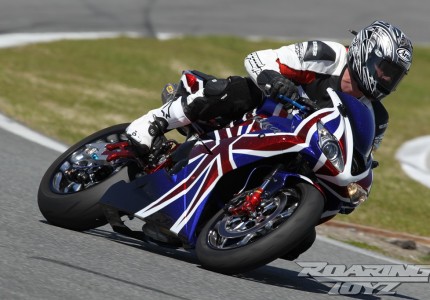 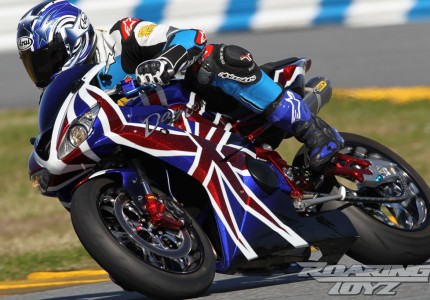 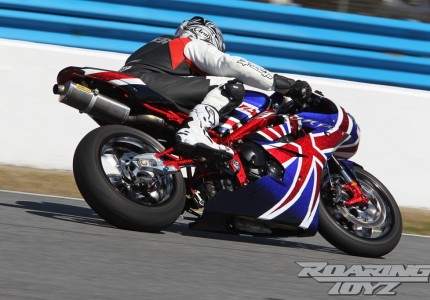 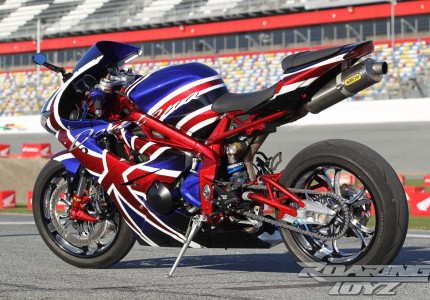 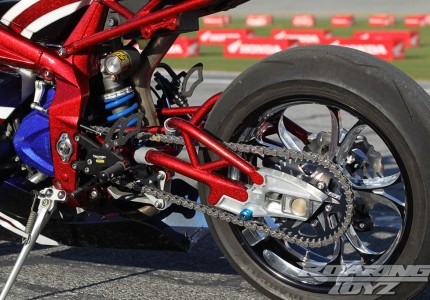 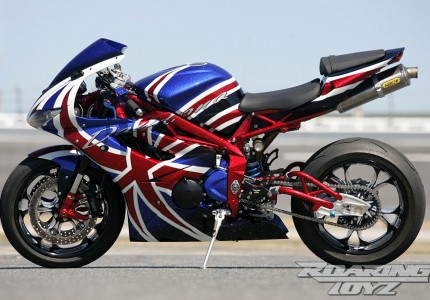 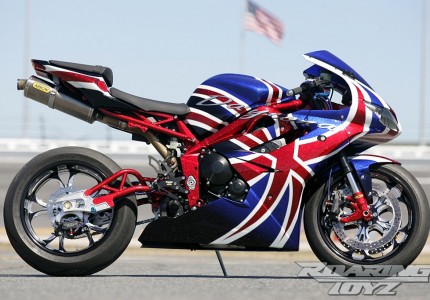 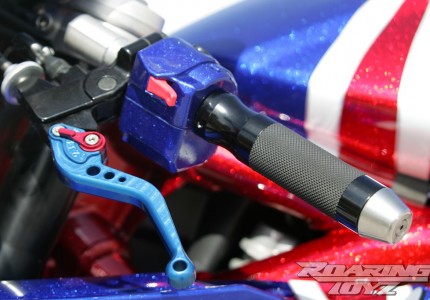 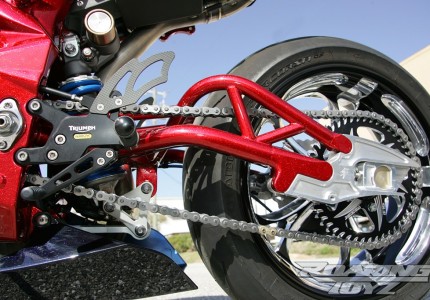 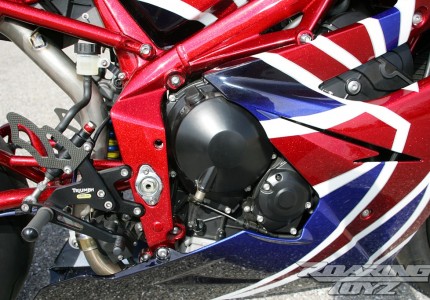 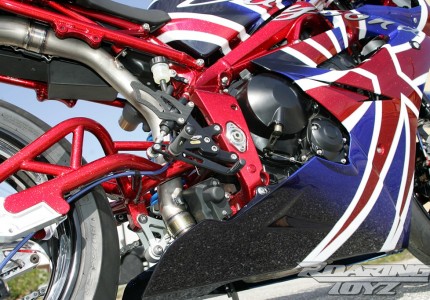 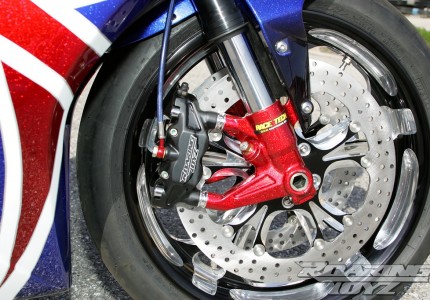 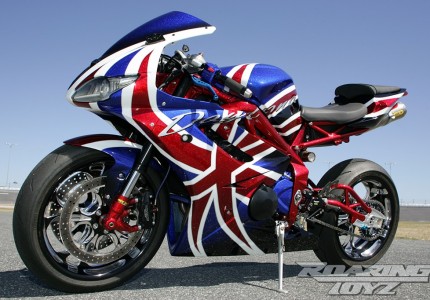 Everyone who has seen a Roaring Toyz custom sportbike knows that the Sarasota, Florida shop gives all of their customs a unique look guaranteed to turn heads. What some may not know, however, is that getting optimum performance is just as important as looks for Roaring Toyz.

Roaring Toyz owner Robert Fisher has been roadracing for over a decade, and he’s got a long list of race wins and championships to his name. That desire to ride hard goes into everything he builds, like the 2009 Triumph 675 that was unveiled at Daytona Bike Week this year. Unlike other customs, this “Union Jack” Triumph made its debut on the high banks of Daytona International Raceway. Fisher intentionally built a custom sportbike that could be put through the paces on one of the most demanding racetracks in the United States. “We are known for building wide tire conversion kits and extended bikes, but after riding this 675, I wanted to retain the handling and come up with a hot custom that would be track worthy,” says Fisher.

The trellis and billet swingarm had to be engineered to exact specifications to match the Triumph’s stock swingarm. Fisher worked with Ransom Motorcycles to achieve the perfect fit: Roaring Toyz handled the CNC machining in-house, while Ransom did the design, fabrication and assembly. Once the swingarm was in place, a set of Performance Machine Luxe Platinum Cut wheels were added. PM doesn’t make wheels for the Triumph, so Fisher had to customize parts to adapt the wheels. Knowing that the suspension would take a beating on the high banks, Fisher turned to RACE TECH for their fork internals. The tubes were anodized black and the fork feet were painted red, combining style and performance. As for lights, a set of Greggs Customs billet LED front turn signals were just the start. “We added a slew of red LED lights from Signal Dynamics and topped that off with four red and blue high-powered police strobe lights in the headlight and out back—just in case I feel the need to pull someone over,” says Fisher.

With the custom Triumph 675 complete, it was sent to Dynoworks to make sure it was ready for its first laps on the track. Finally, Fisher himself geared up and flew the Union Jack around Daytona, proving that a custom can have both speed and style.

Dyno tuned by Donny at Dynoworks in Sarasota, Florida